For thousands of years, technology has been deployed to take advantage of the force of nature, think of the sails on ships for example. As the world’s need for energy increased and we realised that fossil fuel supplies wouldn’t last forever, engineers began to look at nature as a power source. Today we are well on our way to meeting the challenge of renewable energy. So how is the world today facing up to its renewable energy responsibilities? Today we investigate Hydro Electricity.

Hydroelectric power involves harnessing the kinetic energy from moving water to power an electric generator. So what are the benefits of this type of renewable energy?

This all sounds great, but what are the disadvantages?

The Hoover dam, which was first known as the Boulder dam is a concrete dam located in the black canyon along the Colorado River, around 30 miles southeast of Las Vegas. The Dam was constructed between 1931 and 1936 during the depths of the Great depression.

The Dam’s purpose was to provide irrigation, flood control and hydroelectricity which would serve the states of California and Arizona. The Dam stands at 726 feet high and 1,244 feet long. Until 1948 the Dam had the crown of remaining the largest producer of hydroelectric power in the world.

Today, the Dam is still in operation and is a National Historic Landmark, Hoover Dam draws some 7 million tourists a year and another 10 million visit Lake Mead for leisure pursuits.

Where High Voltage is present, PAT Labels Online have a number of Electrical Danger & Warning Labels. 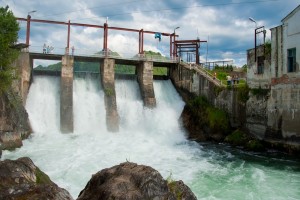 All About Our GHS Labels

Here at PAT Labels Online, we provide our customers with a large choice of labe  Read Full Story

When someone uses a sentence like, “No-one saw the warning signs”, they can mea  Read Full Story

No one likes being told what to do, but sometimes the instructions we receive a  Read Full Story